It looks like you are browsing our International site from the US or Canada. You can stay on the international site but some products and specifications may not be available in your region.

Take me to the US & Canada site

Anyone who has been to our website recently may have noticed we're working our way through getting new images of some fresh new colourways we've introduced to our range.

I (Marketing Mat) took a Venture Ranger 162 in the new Olive Green colourway on a weekend trip with an old friend to Loch Goil, Scotland recently, and thought I'd share a mini trip report and a few photos with you all.

I'd taken the Thursday afternoon off, in theory to pack, but when I got home I became a little absorbed by my other hobby of miniature painting, so instead, packing in earnest began on a frantic Friday morning. 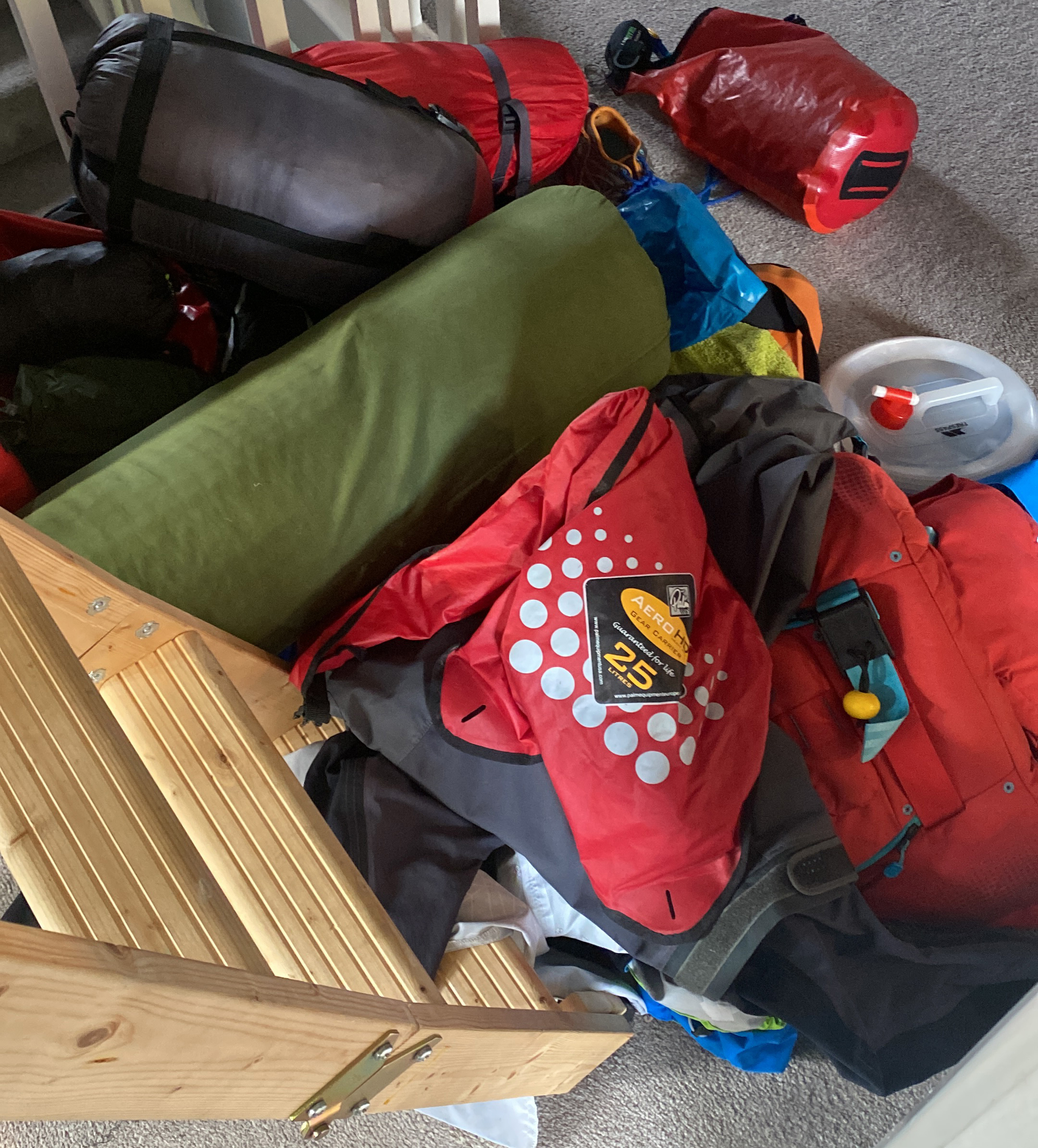 This meant that by the time the car was packed and I'd picked up Simon, it was midday, and all hope of arriving at Lochgoilhead during daylight was lost; Simon will never again make the mistake of telling me we don't have to set off too early and I can have a lie in!

We drove along the west coast of Loch Goil looking for somewhere to park the car over the weekend, and eventually arrived upon a small car park by Carrick Castle around 7pm. As there were houses nearby, we tried to be subtle in unloading and packing the canoe in case it looked like we were up to anything shady... which perhaps made it look even more like we were up to something shady!

Under the cover of darkness, we carried our Olive Green Ranger 162 down onto the beach next to Carrick Castle, which loomed over us as an almost imperceptible rectangular mass in the darkness; just a little ominous.

The wind was southerly, and Loch Goil runs south to north in a near-straight line, opening on to Loch Long at its southern end, which in turn leads to the open sea. Naturally, we chose to paddle south, directly into the wind. I suppose we didn't have a whole lot of choice, as we didn't want to cross the loch in the dark, and the southern third of the loch's western shore was the only reasonable place to set up camp.

With myself being the heavier of us by a margin (the canoeing scene from Shallow Hal comes to mind), and Simon not having much canoeing experience, I was rather focused on controlling the canoe and keeping it moving in the right direction. This would likely have been much harder work in the Prospector, with its higher ends and greater amount of rocker, so I was glad I'd decided we'd take the Ranger for a spin!

It came as a surprise, therefore, when Simon exclaimed, "The water's glowing!" It took me a moment before I realised he was talking about bioluminescence, and I looked down at my paddle to see the water around it appeared as though someone had snapped a glow stick and poured the chemicals into the water around it. This was a fascinating first, for both of us!

It proved rather difficult to gauge landscapes, distances, and... well... pretty much anything in the dark. There were red and green flashing lights that we guessed must be mounted atop buoys to indicate safe passage lanes for larger craft; we hoped they had no relevance to our comparatively small boat, as it was impossible to tell how far away they were.

Every so often, the lights would disappear in the blackness behind who-knows-what (hopefully just the headland!), and at one point they even seemed to change colour... we presumed we must have paddled to within view of their opposite side, and that perhaps they signified port and starboard sides and so the colours on their reverse sides were opposite.

Simon was struggling to get any sense of depth of field as he scanned the coastline for the most likely place we'd find a level clearing to set up camp, but eventually pointed towards what looked like a black hole of eerily-still water... I was honestly a little scared to paddle towards it, but trusted Simon's eyes and pointed us into the blackness.

There was the occasional, oddly familiar noise behind us in the dark, but before I ascertained what was following us, and much sooner than I expected... we hit land; the black hole was actually a rocky shoreline draped in dark seaweed!

With headtorches on, we scrambled over the slippery and uneven shoreline to above the tide line, up a moderately steep, boggy hillside, and found a vaguely flat section of grass which was just big enough for the two of us and had a pair of trees we could sling a tarp over; not perfect, but given the hour and lack of light, it would do.

We brought the boat above the tide line, and tucked it under a tree on a patch of grass... I felt the canoe's Olive Green colour camouflaged it rather well here. 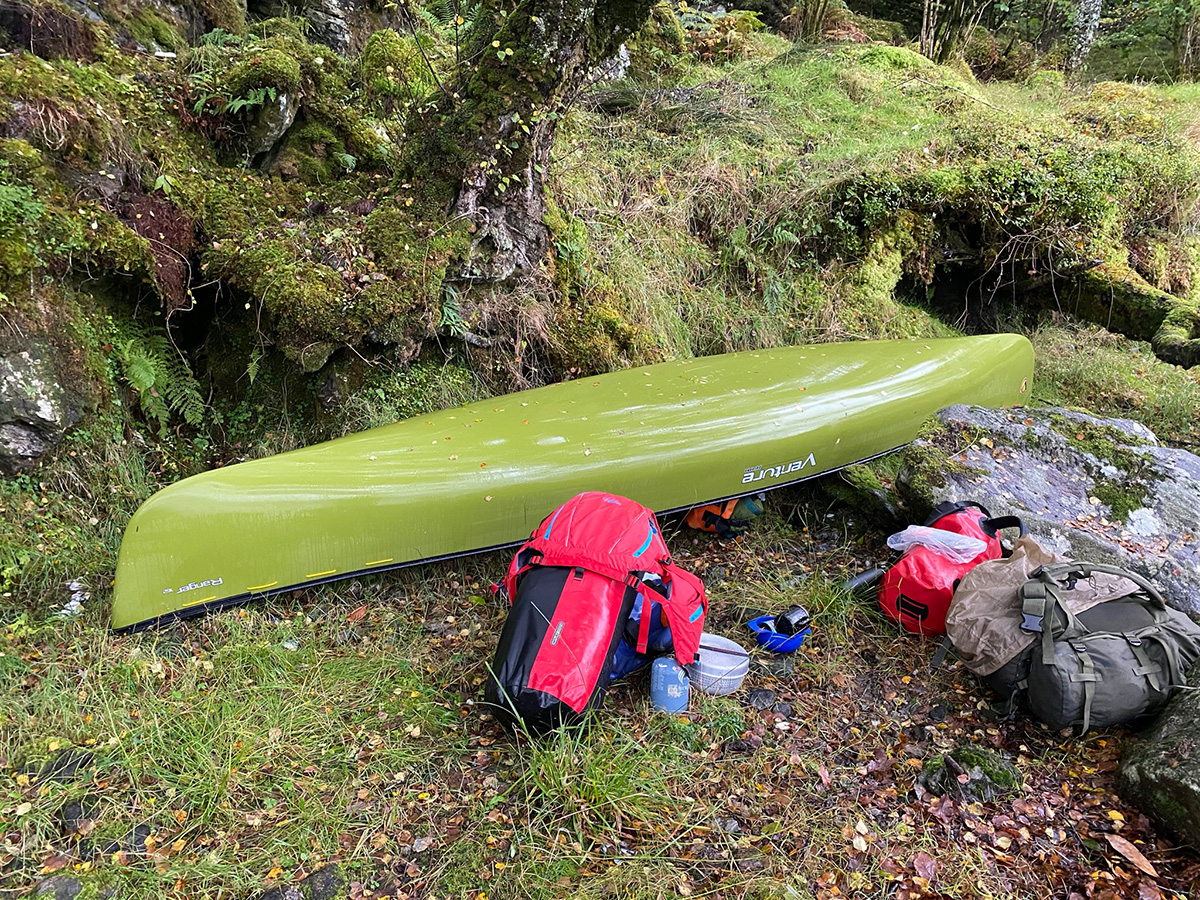 This is when we left my element and entered Simon's, as he threw the right knots into various lengths of cord to ensure the tarp stayed put. The last thing to do before we climbed into our bivvy bags for the night was to cook a rather pleasant dinner of spinach and ricotta tortellini on the Trangia; yum.

The morning view was lovely, if a little misty, but it took me some time to wrestle my way out of the bivvy bag to fully enjoy it on account of both sides of my body being somehow both sore and completely numb... I really must get a better roll mat! 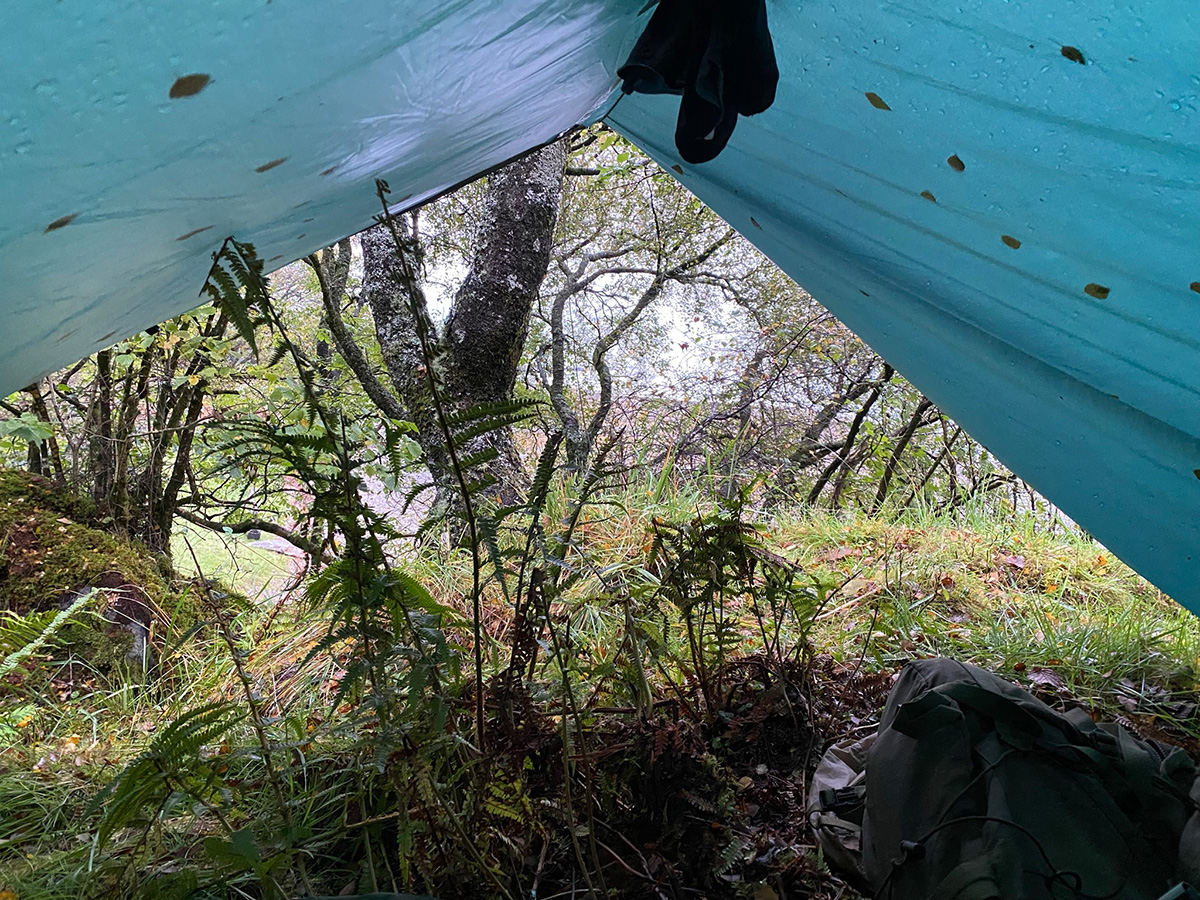 Following a vanilla coffee and a breakfast of sausages and beans from a can (pure luxury!), we packed up, crossed the loch, and explored the opposite coastline - it was great to compare what we thought was there during the dark to what was actually there.

Being a sea loch, Loch Goil's coast is packed with both mussels and molluscs, a few of which we picked up along the way with that evening's dinner in mind. You have to catch the molluscs unawares, with most success being had with those which are underwater; fumble the first attempt, and they clamp down so hard on the rock you'll need a chisel to get them off! 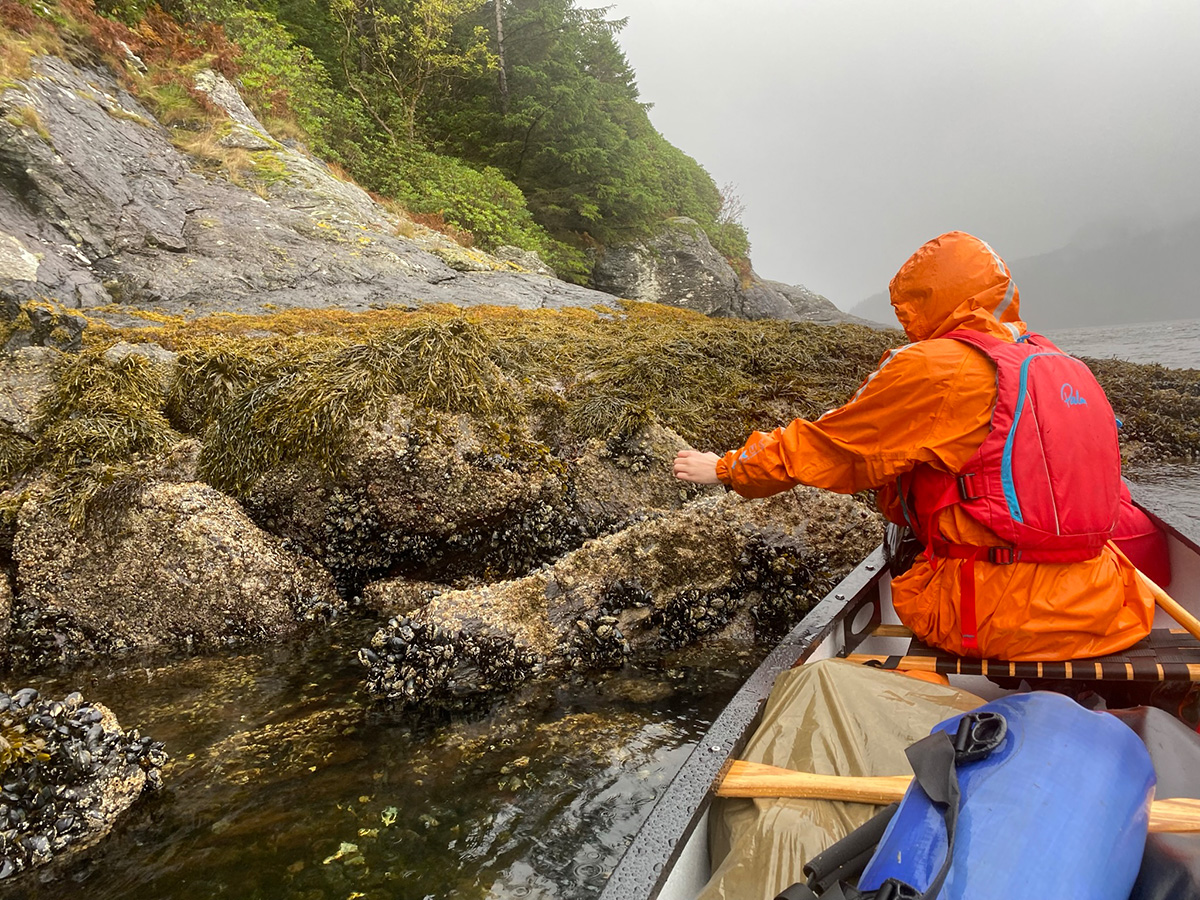 We paddled a little further along the coast, hopping out of the boat now and again to explore and examine potential campsites; at one point this evolved into us hiking up alongside a stream with several picturesque waterfalls, before realising just how steep the climb had been and how far from the boat we now were... whoops! 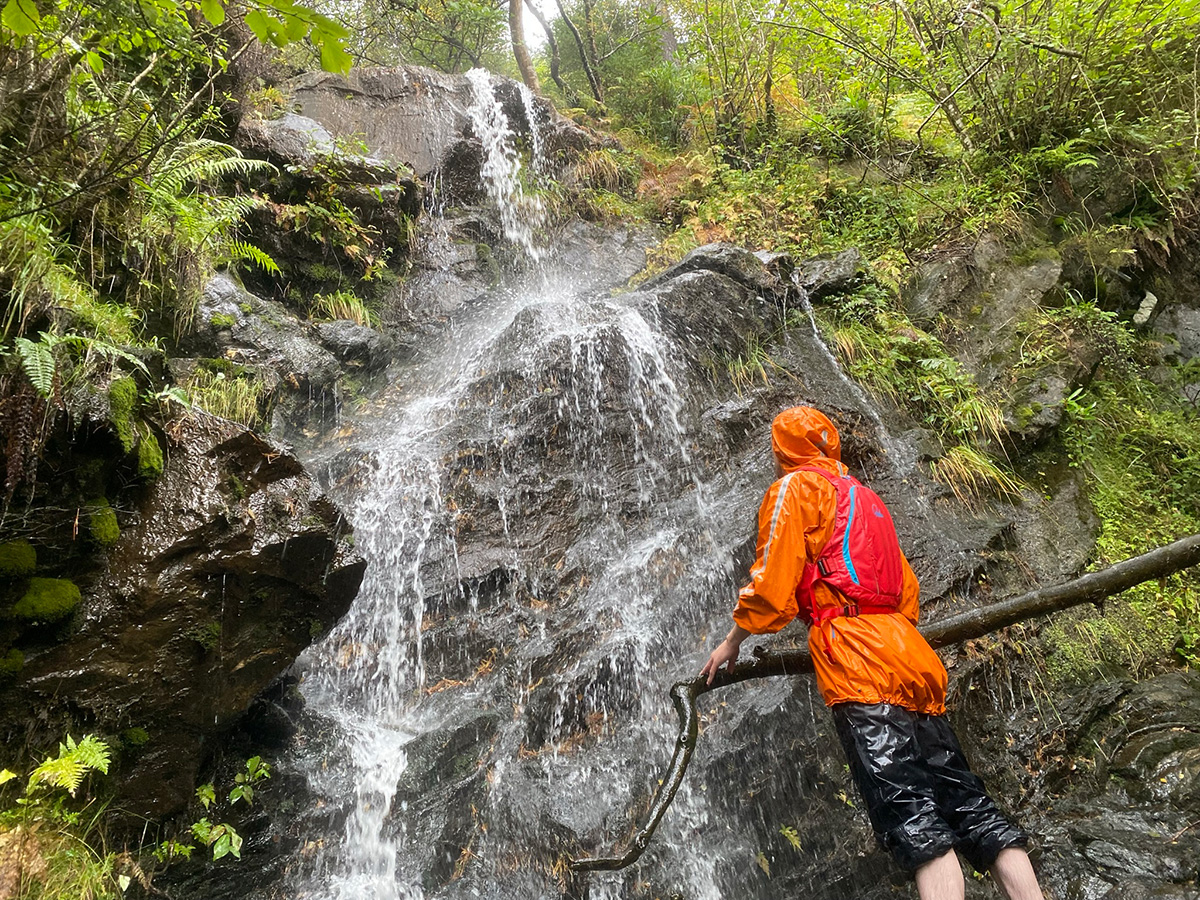 After we relocated the Ranger, we paddled towards a flat, grassy area of the coastline, thinking it would be a perfect place to camp... except it turned out to be the garden of a rather swanky holiday home, so perhaps not!

Turning to head back for lunch on a nice, rocky perch we'd seen earlier, I heard the same noise I'd heard in the darkness the night before and spotted the culprit... a pair of seals! We kept our distance and watched as they drifted by as relaxed as can be and then eventually disappeared under the water.

I let Simon have a turn at steering the canoe after lunch, so we spent most of the afternoon paddling around in circles; I'm sure Simon would claim the route was intentional, and perhaps I'd give him the benefit of the doubt. Once we were both thoroughly dizzy, we decided it was time to find a campsite before we faced the same challenges as the previous night. 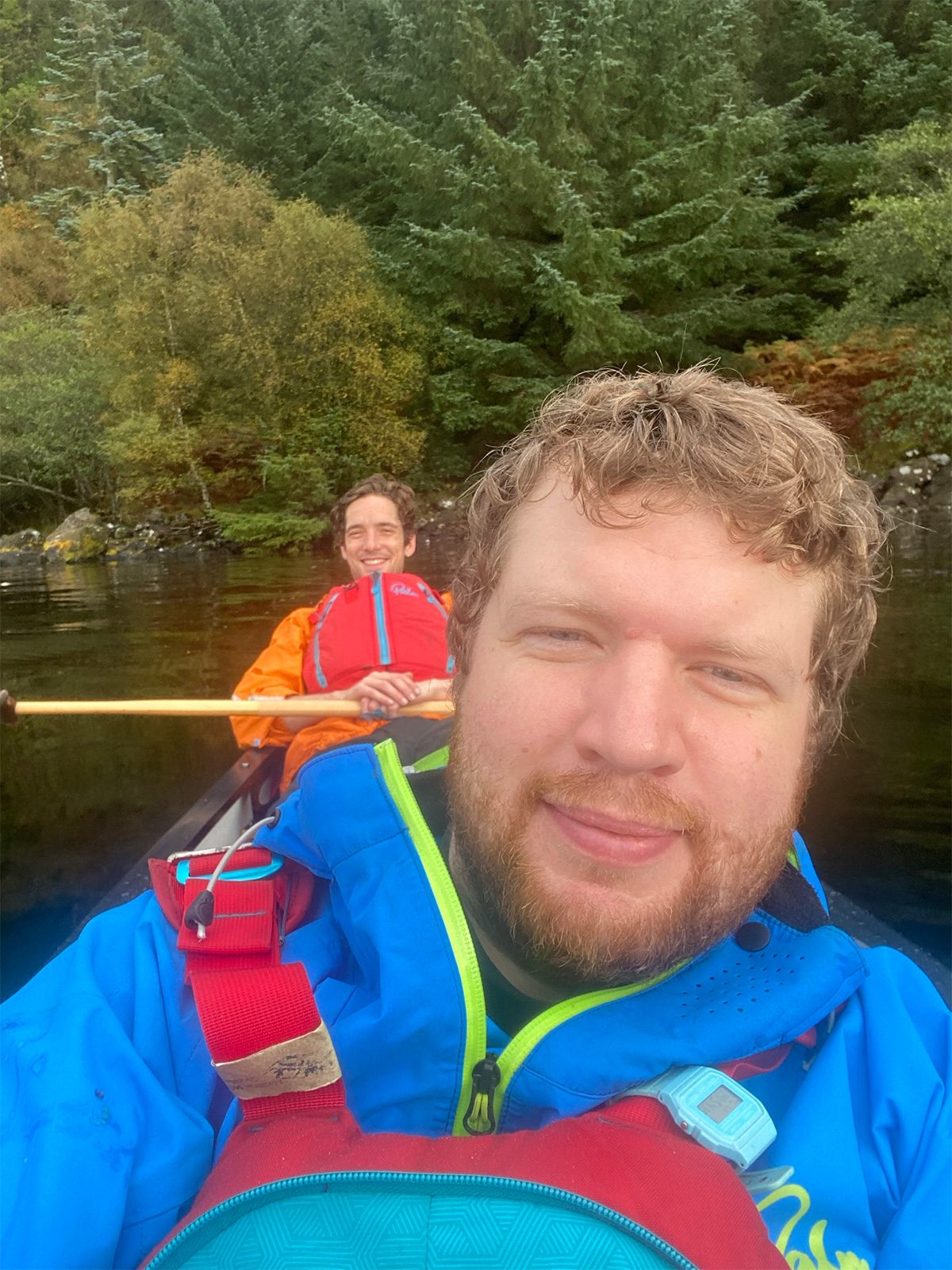 We returned to explore a likely spot we'd seen earlier in the day with a good landing spot and relatively level ground; here we found a clearing not too far from the shore, but with a moderate amount of shelter and suitable trees for the tarp. Although it was dry, it was quite close to a stream and a corresponding bog, as well as right next to an animal track, which Simon warned could mean there were ticks lurking in the grass waiting to hitch a ride (it would later become apparent on the drive home that he'd been right to be wary, as we found several feasting on my arm!).

Widening our search, we found some pleasant spots to unwind, but they were either more exposed or less comfy-looking, so we stuck with the original. We did come across some intriguing ruins of a row of buildings, however, which contained some cast iron bed frames but were a little small to have been family homes.

After we'd spent a few minutes exploring the ruins, Simon and I walked back towards the campsite around separate ends of the row of buildings... or so I thought! In that short space of time, Simon had somehow vanished, and so I made my way back to the campsite alone.

I soon regretted this when I was attempting to cross the aforementioned bog, and in a scene reminiscent of some of the hijinks-filled-adventures Simon and I had shared in our youth, I sank up to my knees in it... at least I was wearing dry pants! Luckily, I managed to get myself free, and then just sat and enjoyed the view until Simon too ventured back to the boat. 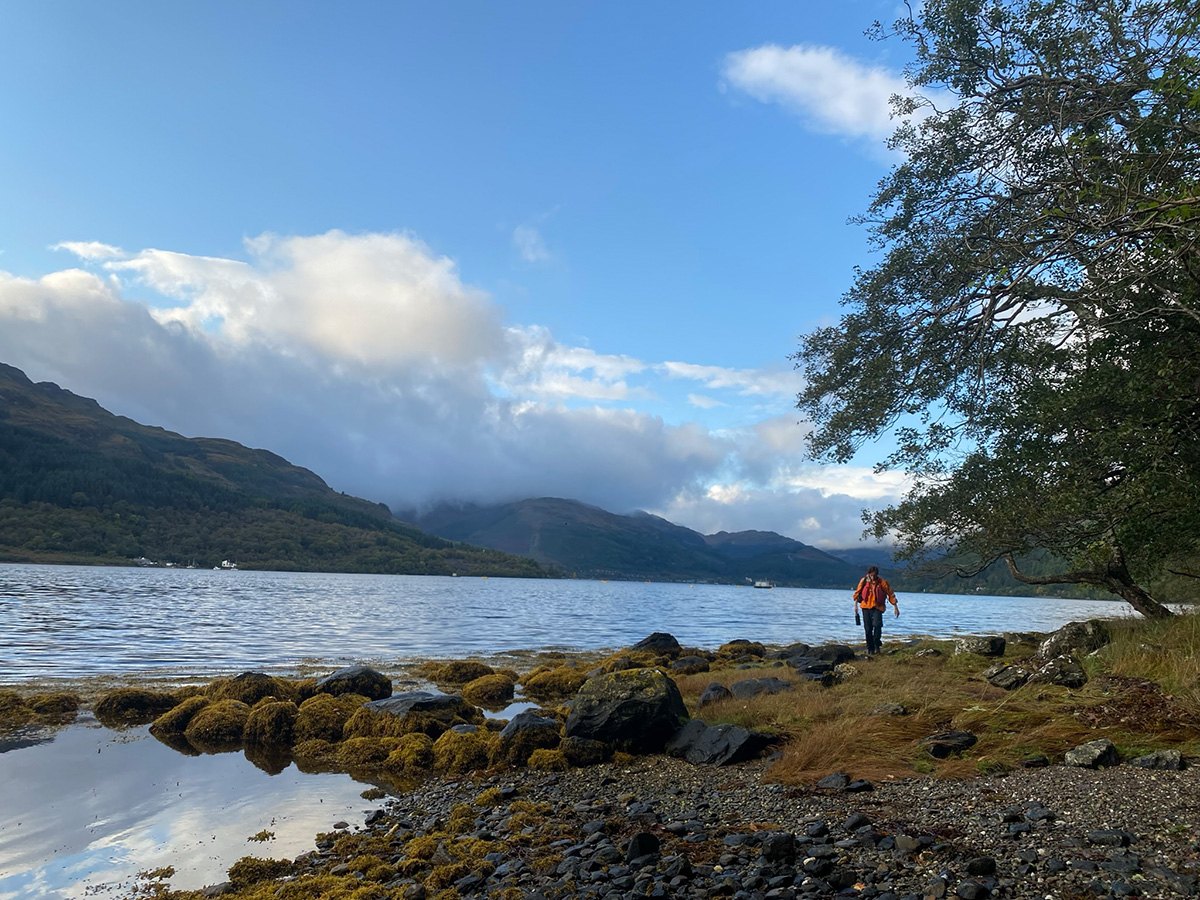 The gear was lugged to the chosen campsite, Simon flexed his bushcraft muscle again to set up the tarp, and we headed towards the shore to cook dinner.

The light was failing, and in the thick of the trees we could only see a hundred metres or so in either direction, which made it a little disconcerting when we heard the call of a buck loud and clear. This wasn't the ideal season for close encounters with male dear, which would be much stronger and faster than either of us!

We settled for a policy of making ourselves as small and inaudible as possible while we waited for the buck to move along, and quietly began cooking dinner.

Simon played head chef and directed the main meal whilst boiling the seafood caught earlier that day on a second stove... although he did make the questionable choice to knock that stove over twice during the process, spilling the molluscs everywhere and briefly setting the rock it was balanced on alight with burning methylated spirits. I suppose that must somehow improve the flavour. 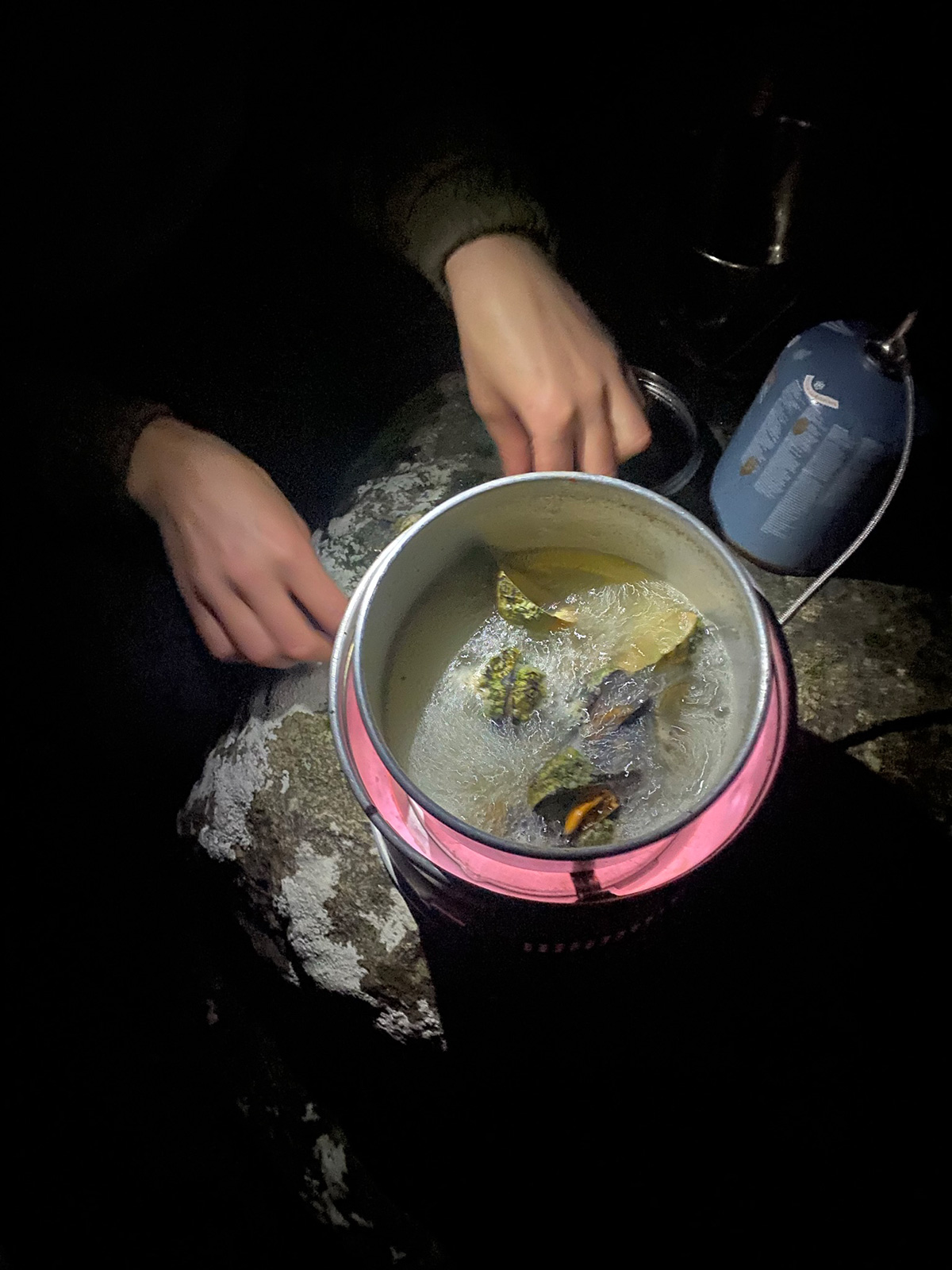 As we ate, we admired the many, many stars that, thanks to the absence of light pollution, were visible in the night sky above us... the occasional threatening cloud obscuring them, but thankfully passing over without rain.

It was a colder night than previous, perhaps due to the lack of cloud cover, but we slept well and after a quick breakfast of granola bars, headed down to the shore the next morning to see a seal watching us from the water.

The tide had dropped significantly, and so it was quite a walk with the boat, over the slippery rocks, to the water, and this made the coastline seem entirely new as we explored it again on the way back towards the car. We saw starfish, anemones, and even a lobster that must have been out of sight in the deeps just the day before. 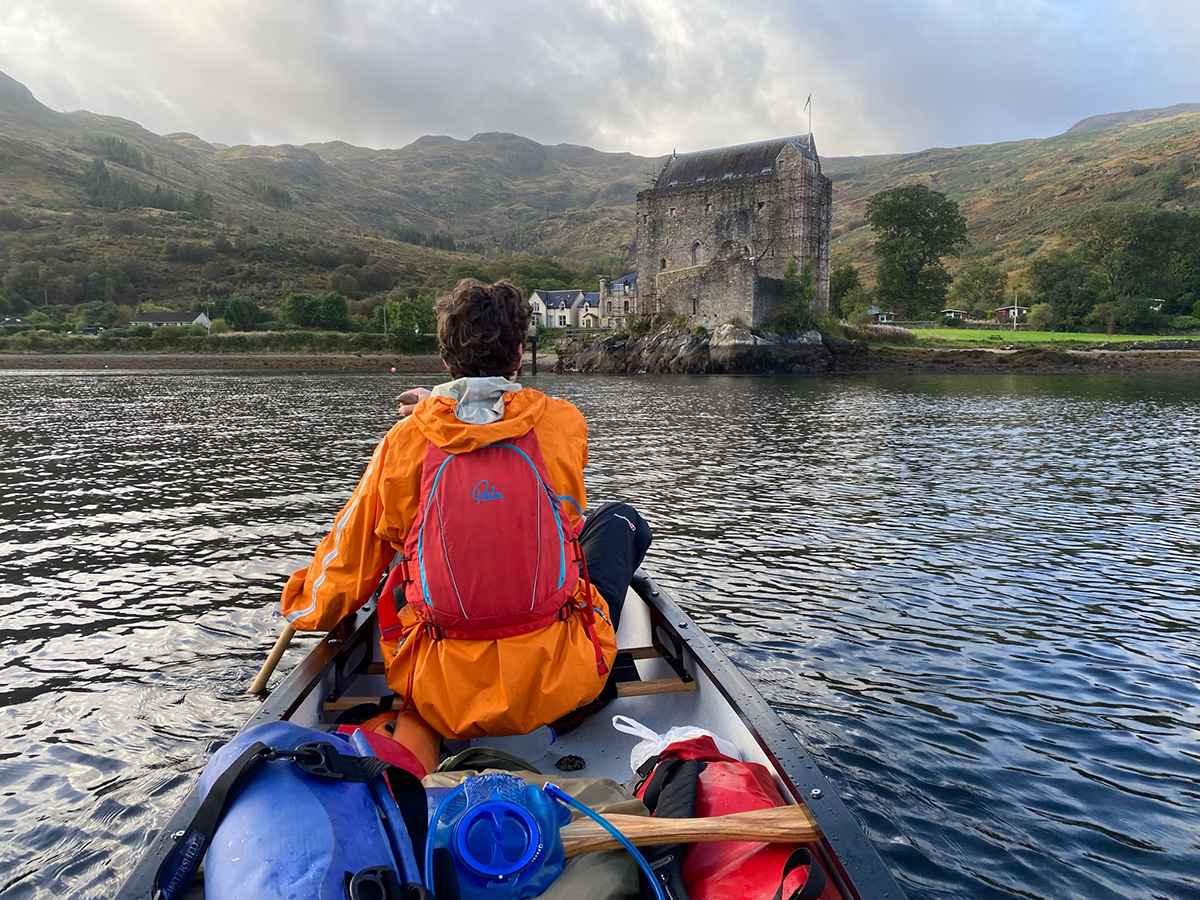 As we paddled across towards Carrick Castle on the final stretch of our adventure, we noticed some wisps of cloud rising so rapidly from a valley on the opposite shore that we almost mistook them as having originated from a steam train. It's fascinating how geography and meteorology interact at times.